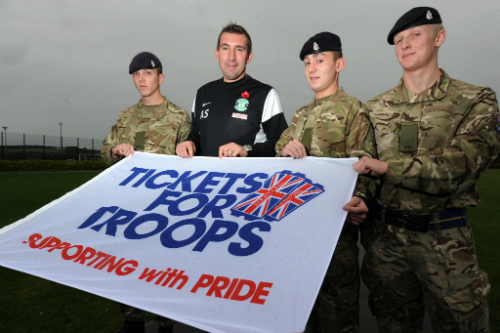 Hibernian FC and opponents Queen of the South are to join forces to mark the 100th anniversary of the outbreak of The Great War at the forthcoming match at Easter Road on Saturday, November 15th (kick off 3pm).

Hundreds of free tickets are being made available through both Clubs to veterans and their families, and also to current servicemen and women and their families. The Club is working with a number of organisations, including Tickets for Troops and the Royal British Legion.

Hibernian Head Coach Alan Stubbs launched the initiative with three soldiers from the Royal Artillery, Gunner Luke Kilby, Gunner Peter Stanley and Gunner Courtney Lewis, who will all be attending the match.

Tickets are available to troops who are currently serving or who have been medically discharged since 2001. You can click here to book tickets now.

Hibernian will wear a one-off shirt for the match against Queen of the South in remembrance of those who gave their lives in conflict. The home shirt worn by our players will feature a poppy symbol with the words: ‘In Flanders fields the poppies blow’ written underneath. The quotation is from a famous war poem written by Scots Canadian field surgeon Major John McCrae.

After the match, all the exclusive shirts will be available to purchase via an online auction with all funds raised going directly to Help 4 Heroes.

A century ago, millions of men and women made the ultimate sacrifice. Many players and supporters of Scottish clubs, including Hibernian and Queen of the South, volunteered for active service; tragically, many never returned, but their memory marches on.