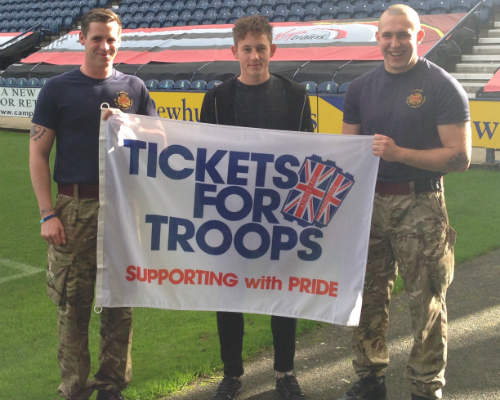 Preston North End is giving their backing to Tickets For Troops, the military charity which gives complimentary tickets to members of HM Armed Forces, by donating 50 tickets for each of the Club’s League One fixtures over the remainder of the season.

Starting against Fleetwood Town on Saturday, 25th October, tickets will be made available for all active service personnel and those who have been discharged through injury since 2001.

Speaking about the scheme, North End’s customer service manager Amanda Craig said:” Preston North End are delighted to support the Tickets For Troops campaign, joining the ever growing list of League One clubs who have signed up since the campaign began in 2009.

“It is important for the Club to support the extraordinary men and women who do great things for the country on a daily basis, and supporting Tickets For Troops is just one of the ways we can show our appreciation and huge thanks to them.

“Preston North End looks forward to welcoming the men and women of our forces to Deepdale.

“On behalf of the Club I would like to thank The Duke of Lancaster's Regiment, Lance Corporal Andrew Clegg and Kingsman Eden Shard of The 2nd Battalion for their support of the launch.”

To apply for tickets, troops will need to register via the Tickets for Troops website, with tickets being available for collection on the day of the match.

“Thanks to their generosity, the brave members of our Armed Forces will have the opportunity to attend all home games at Deepdale for the remainder of this season.”

Another to lend his backing to the scheme is PNE midfielder Josh Brownhill whose brother Lewis is a mechanic in the RAF and is currently serving in Afghanistan.

“It is great that the Club are involved in this scheme because the troops do so much work for the country.

“They deserve rewards for what they do and it is great that Preston can give something to them as a way of saying thank you.”