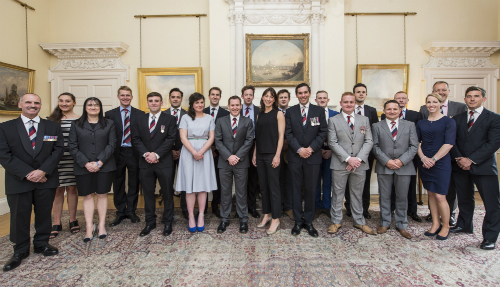 Last night, our Founding Patron, Samantha Cameron hosted a reception to thank members of the Armed Forces who ran the 2016 Virgin London Marathon for Tickets For Troops.

The 23 marathon runners, from across the British Army, have so far raised a staggering £13,000 for Tickets For Troops.

Captain Jamie Harle and Warrant Officer Class One Ian Navin, who are both based at HQ London District, led a team of 22 runners, from different regiments across the British Army, including Musician Nicole Rushforth from the Grenadier Guards who played in the St George’s Day Concert at Cadogan Hall the night before the marathon.

Samantha Cameron, Patron of Tickets For Troops said, "It is wonderful to be able to celebrate the London Marathon achievements with these remarkable soldiers tonight. Their dedication and commitment to their training and fundraising for Tickets For Troops demonstrates the integrity of the servicemen and women who serve our country."

Lord Marland, Chairman of Tickets For Troops said, “We are very proud of every one of the 23 soldiers who completed the London Marathon last weekend. They have raised a phenomenal about of money for Tickets For Troops and we’re extremely grateful that they chose to promote the charity, raising awareness to other service personnel of what we have to offer”